Impact of Pandemic on Retail loans 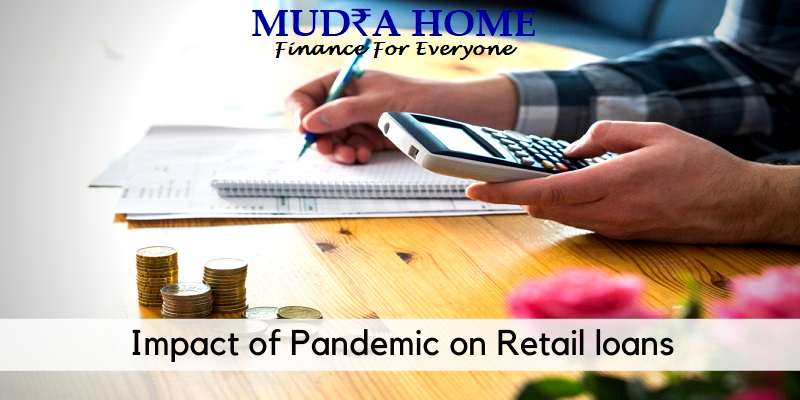 The world has been battling the coronavirus pandemic for more than five months. Although the SARS-Cov-2 infection primarily caused a landslide in the medical infrastructure, it also had a significant impact on other sectors of the economy. The banking sector is one of the negatively affected sectors.

On March 27, the Reserve Bank of India (RBI) launched the Covid-19 regulatory package to save the economy by increasing the cash reserve ratio (CRR) by 100 basis points and the pension rate by 75 basis points. plus a three-month loan. moratorium. followed by further systematic rate cuts and regulatory easing. On May 17, the government announced a stimulus package of 20 billion rupees divided into five tranches covering different aspects of the economy and comprising 8.1 billion rupees of the RBI liquidity measure. The effectiveness of these measures is very similar to that of all Covid-19 vaccine candidates, that is, uncertain and speculative. Regardless of the effectiveness or worsening of these stimulus packages, they are bound to put significant pressure on the banking sector.

The impact of the pandemic, foreclosure, and countermeasures on banks can be divided into three categories: net interest margins, personal and business loans, and gross non-performing assets (GNPA).

The Net Interest Margin (NIM) compares the net interest income generated by a financial institution from its credit products with the interest paid to its depositors and creditors. The NIM is a profitability indicator that assesses the financial health of the institute over a period of time. The NIM of a bank corresponds to the operating margin of an industrial company. Net interest margin is subject to various internal and external factors, such as net interest margin (NII), capital adequacy ratio (CAR), savings and checking account ratio (CASA), size and the quality of bank assets, operating profit, and repo. valuation. and GDP. All actions taken by the RBI and the government will result in changes to the above factors. The scope of the change is a more quantitative approach to banking, but according to the available banking literature, three factors (CASA index, net interest income, and GNP) were consistent at the NIM level. It can be seen that due to the lack of indebtedness (given the economic crisis) and the relentless lowering of the SLR and CRR rates, the banks have raised sufficient funds. Now that banks have a large amount of cash on their books, the cost of depositing with banks will continue to rise. This situation has a detrimental effect on the CASA fee, which is the relationship between checking account deposits and a savings account. This ratio is a measure of the low cost of money since banks generally pay no interest on checking accounts and very low interest on savings accounts. The higher the better. When the cost of deposits increases, clients and savers are reluctant to deposit their money in banks, which reduces the CASA rate. The lower CASA ratio is associated with a lower net interest margin (INI), the interest income that banks generate from their loans after adjusting their debts. The amount of NII in a bank is directly proportional to the number of loans managed by banks, further reducing the NIM. High levels of GNPA negatively affect the NIM as they degrade bank wealth and lower potential NII.

According to a report published by S&P Global Ratings, “Global GDP will contract 3.8% this year, reflecting a deeper and longer impact on emerging markets led by India.” He also said that the recession caused by Covid will weigh on credit metrics until 2023 due to the halt in production and rising debt burdens, putting businesses at risk.

It is quite obvious that the manufacturing processes in Indian and global companies have been severely affected due to the pandemic. Since the closure, the production houses have stopped operating due to a sharp drop in demand. The drop in demand is not very sudden, the Indian economy has tried for three quarters to stimulate consumer demand and private investment. The lockdown has exacerbated this demand crisis and has also affected the manufacturing cycle of the consumer cycle. This led to many complications such as decreased business profitability, inability to repay loans, mass layoffs, etc. Supply of labor with high-interest payments and lack of sales. Interestingly, these are also the industries that are heavily in debt (due to bank loans or other debt instruments). From a banking perspective, there are two ways to tackle this problem: an explosion of NPAs and minimal loans to the industry. Companies resort to cost reduction measures as it is difficult to generate income. They are also trying to reduce their debts due to the inability to pay their debts due to this crisis. As a result, most business houses are reluctant to make loans or borrowers are bad creditors and are at high risk of default. Either way, the banks are lost. In addition to businesses, the general public is also reluctant to borrow because jobs are lost or wages and incomes are subsidized. More than 122 million Indians lost their jobs in April, according to a report. In such cases, the bank is unable to repay the loans, which directly impacts its NII, even though the RBI has taken steps to create liquidity by lowering CRR and SLR rates to help borrowers in most cases. sometimes, granting a cheaper loan. the situation worsens. The inability to borrow is so widespread that banks now have huge amounts of liquidity. For example, SBI, the largest public sector bank, had a liquidity ratio of 143% compared to the normal 80%. This situation is extremely detrimental to profitability and the bank’s ability to support the economy on the road to recovery.

Non-performing assets (NPA) refers to the classification of overdue or past-due loans. These have been a troublemaker in the banking industry for some time. The rise in delinquency levels at banks since the financial crisis has caused severe economic damage and turmoil at large institutions such as YES Bank. According to the RBI’s Financial Stability Report, the country’s gross NPA will rise to 9.9% in September, which is considered the highest among emerging markets. The Covid crisis will inevitably increase the values ​​of NPAs in the economy. According to a report published by CRISIL, the country’s ANP will be between 11 and 11.5% by 2021. The report also forecasts that India’s GDP will contract by 4%. Due to the loss of economic activity, borrowers will not be able to generate sufficient income or income to pay their debts, resulting in defaults and an increase in bad debts on bank balance sheets. According to sectoral data released by the RBI, a total of 12 billion rupees is the outstanding loan in January 2020 from the industries hardest hit by the pandemic. High NPA values ​​not only affect a bank’s profitability but also dramatically reduce its creditworthiness by reducing the capital available to make loans and forcing it to increase the amount of contingency provision that is earmarked. Although the risk of non-performing loans for banks is exorbitant, relief measures such as the three-month credit moratorium and the credit availability program for MSMEs continue to put more pressure on them.

The future of banks in India looks bleak and desperately needs a boost with the right policies.