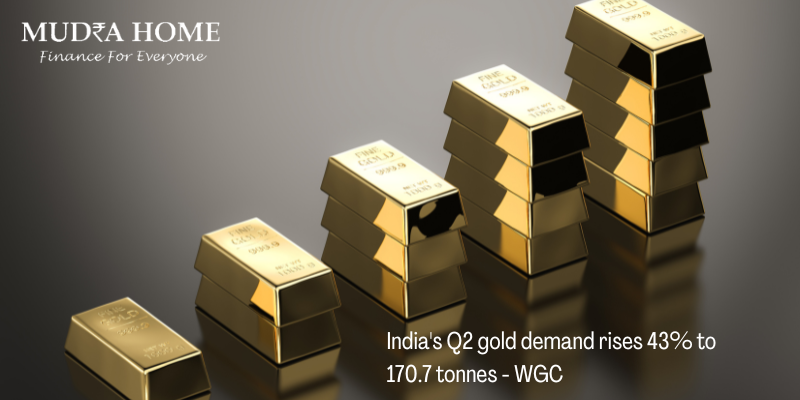 India’s gold demand surged 43% in the April-June quarter, but factors including inflation, rupee-USD rates, and political action are likely to weigh on consumer sentiment, a report says.

According to a World Gold Council (WGC) report, India’s gold demand was 170.7 tonnes in the April-June quarter, compared to 119.6 tonnes in the corresponding quarter of 2021.

“Akshaya Tritiya, along with traditional bridal buying, boosted jewelry demand by 49% to 140.3 tonnes, albeit from a weak base as the second quarter of last year was hit by a devastating second wave from COVID,” WGC India Regional Executive Director Somasundaram PR told PTI.

Looking ahead, he said the WGC maintains the full-year 2022 demand outlook at 800-850 tonnes, but at the lower end of the range due to factors such as inflation, gold prices, Rs. USD and the influence of political measures, among others. things, consumer sentiment. .

“In the second half of this year, jewelry demand in India faces downside risks due to uncertainty over the economic outlook, a higher import duty, and the possibility of further restrictions on buying gold, although this is It will take into account for temporary purposes and tactical reasons the Indian rupee and the US dollar exchange rate,” he noted.

In the quarter, imports also grew 34% to 170 tonnes from 131.6 tonnes for the same period in 2021. Somasundaram said India’s bullion market is being transformed with some fundamental structural reforms, although demand is picking up. almost normal. such as forced drilling and stock trading.

“The proposed establishment of the India International Bullion Exchange (IIBX) will pave the way to establish India as a reliable and efficient trading hub and expand its influence in the world’s precious metals markets,” he said.

With efficient precious metal price discovery, responsible and sustainable sourcing, world-class trading and vault infrastructure in GIFT City, and an agile regulatory framework with the International Financial Services Centers Authority (IFSCA), IIBX will emerge as a credible global entity in the precious metals industry, he said.

“As the importance of precious metals increases in an uncertain world, a trusted ecosystem powered by IIBX will provide a global advantage for gold investors. India’s efforts to monetize gold will also receive significant support from a transparent precious metals trading system at GIFT City,” Somasundaram said.