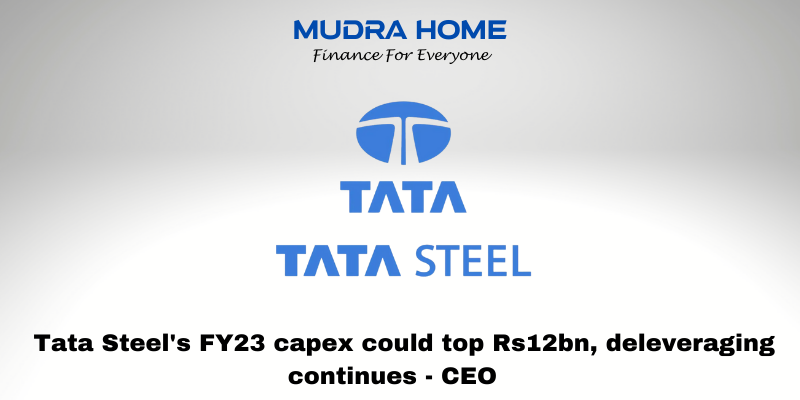 Tata Steel Ltd has projected a CAPEX of Rs 12 billion for 2022-2023, which could rise after the company conducts a mid-year review of its growth plans, management told reporters and journalists during a conference call.

Of the planned investments, approximately Rs 8,500-9,000 crore would go to projects in India, while the rest would go to international projects.

“Our investment for the year is Rs 12 billion, we will review it after six months and have a call to see how we are progressing,” said TV Narendran, CEO and Managing Director.

“We think we can take advantage of that and grow,” she said.

Management said the investment amount could be increased after the semi-annual review as the company potentially completes a multi-year investment program.

Koushik Chatterjee, CEO, and CFO said: “Our Capex cash outflow for the year (FY22) was Rs 10,522 crore, well within our previous forecast. We remain focused on deleveraging while advancing our strategic growth priorities; We are focused on completing the Kalinganagar expansion. Despite higher working capital, taxes, and investments, Tata Steel generated a strong free cash flow of Rs 27,185 crore for the year.

On May 3, despite a sharp rise in international coal prices and the inflationary impact of various commodities, Tata Steel reported a consolidated net profit of Rs 9,835.12 crore for the quarter ending March 2022, 37.3% more than the previous year. India’s largest steelmaker saw consolidated sales growth of 39% YoY to Rs.69,323.50 crore in Q4, with operations in India posting 34% growth. The company’s European operations grew 53% during the same period. The company also announced a 10-for-1 stock split.

The company is optimistic about domestic demand, although raw material prices remain high.

“We expect demand in India to remain strong. There was some reluctance to buy due to fears that steel prices were too high and this would naturally affect some clients’ working capital. People also pay attention to what is happening in the international market. Basically, demand in India has been strong, commercial vehicles and passenger cars have been strong, and construction activity is picking up as infrastructure spending picks up,” Narendran said.

He said international demand will be “pretty strong” despite concerns about a slowdown in Chinese demand due to the impact of COVID amid global infrastructure spending and supply disruption from Russia and Ukraine.

The company said that net debt fell to Rs 51,049 crore, resulting in an improvement in the net debt to EBITDA (earnings before interest, tax, depreciation, and amortization) ratio to 0.80 and the debt ratio net to capital at 0.52.

“We have had a deleveraging policy of a billion dollars a year for many years, which we exceeded for three years. This policy will continue. If you look at our cash flow, we pulled at a much higher rate,” Chatterjee said.